Dr. Maria Montessori first created the Silence Game while working with children who were partially deaf.   She began by implementing an activity which involved her standing at the back of the room with the children facing away from her while she quietly called the name of each child.  The children would listen intently, and when they heard their name called, they would quietly walk to the back of the room and remain silently by her side.

There are now several similar activities implemented in Montessori schools all around the world. Though it may vary from classroom to classroom, The Silence Game is a wonderful activity that can help children relax, create a calm environment, lengthen attention spans, and learn to appreciate silence. 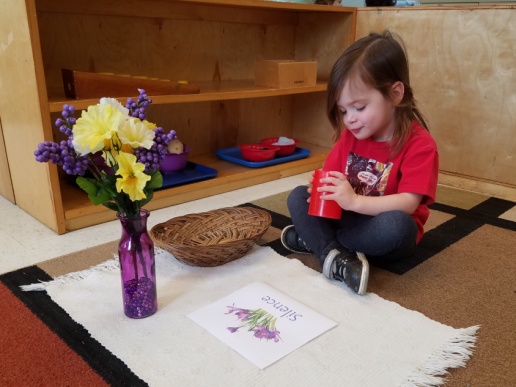 I recently had the opportunity to implement the Silence Game in a Montessori preschool environment. We used Dr. Montessori’s original model for our game. This was our preschool group’s first experience playing it and surprisingly, most had no problem at all remaining still. Some however, couldn’t resist the temptation to fidget, or to make silly faces at the friend beside them. It was interesting to see how each child reacted differently to the Silence Game. Overall, the experience was pleasant and I was quite impressed with specific children doing much better at being silent than I had anticipate. If practiced over time, each child’s attention span should increase, as well as their ability to control their bodies.

Variations on The Montessori Silence Game:

WMS LAKEFOREST had our end of the summer Luau compete with a ukulele concert and Hawaiian cuisine. ...

Share on FacebookShare on TwitterShare on Linked InShare by Email